Are Parents Spending Too Much Money on Their Kids? 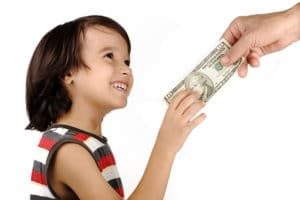 In its annual “Parents, Kids and Money” survey, T. Rowe Price revealed that 66% of the parents questioned giving their kids an allowance and the majority of them (55%) refused to do so without the kids earning it. The annual survey paints a very accurate picture of how parents spend their money and what guidance they give their kids in regards to earning, saving, sharing, spending and investing whatever money they (the kids) get their hands on.

At a time when only 57% of Americans say they have less than $1,000 in savings and 39% say they have no savings at all, you wonder why parents fall into the trap of spending money on their kids when it’s clear they can’t afford it. The following survey results show that parents are willing to pay out hundreds of dollars each year instead of saving money for college, emergencies or retirement. Where do you stand in these figures?

None of us are born with the financial wisdom or will-power necessary to succeed in today’s world. There are too many decisions, too many temptations and too many obligations that tend to get a share of every dollar that comes in or is earned. While it might be too late for us adults to break the habits we’ve built, it’s not too late for our kids. If children as young as three years old can learn to use a cell phone or tablet, they are certainly capable of earning money around the house and learning how to manage it.

Chores and an allowance are a natural stepping-stone to learning money management, but there are plenty of parents willing to argue for or against the matter. And sometimes the argument is passionate. However, if 55% of parents are eager to give their child money for good grades or good behavior, why not do the same things as having chores done. Chores build work ethic, responsibility, and accountability. Add an allowance, and now kids earn the value of hard work and money.

BusyKid is a child chore app to help teach these valuable lessons, but it can also help a parent open a door of communication between a parent and child when it comes to financing. At a time when parents are more comfortable talking to kids about sex than money, I’m not sure BusyKid isn’t one of the most valuable weekly chore chart tool available to parents.