Will $100 Today Be Worth More or Less a Year From Now? 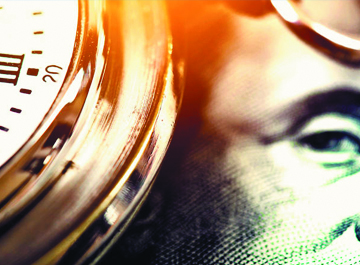 How much $100 will actually be worth in 12 months all depends on what you do with it. But stuff it under the mattress or in a wallet, and it’ll definitely be worth less next year.

Because, inflation—the unfortunate phenomenon of prices going up. The value of our money goes down as prices go up, meaning $100 today buys less than $100 in the future.

That said, our purchasing power doesn’t decrease too much in a relatively short period of time. The inflation rate, as of September 2018, is 2.28 percent—higher than in recent years but nowhere near the double-digit levels seen in the late 1970s and early 1980s—which is about where we want it.

The Federal Reserve, our central bank, controls interest rates to get us close to its Goldilocks inflation rate of 2 percent. Much higher, and we risk totally unaffordable prices; much lower, and it’s difficult for companies to earn profits or increase wages. Raising interest rates can temper inflation because it makes it more expensive to borrow money, which hampers overall spending and prices. (Lower demand for goods = lower prices.)

Since December 2015, we’ve seen eight small interest rate hikes, and there’s likely another coming in December 2018. That’s moved the fed funds rate—or the rate the central bank charges banks to borrow—from near zero to about 2.25 percent.

That can help balance out other factors, like the ongoing trade war, which has already pushed up prices on items like sodas, recreational vehicles and appliances, and the low unemployment rate. (The theory is that more disposable income leads to more spending and higher demand for goods, and, thus, higher prices.)

So is there anything I can to do protect my money from inflation?

Transferring that $100 from under the mattress to an interest-earning savings account is a good start. But given current yields, it still may not be enough. The average rate on savings accounts is just 0.09 percent, and even the highest-yielding accounts offer 2.25 percent—less than the current rate of inflation.

Another option: There are two- to five-year CDs (certificates of deposit) offering yields of 2.9 percent or higher. The downside, however, is that these options lock up your money for the specified term, so you’ll be penalized if you take it out early.

Your best bet for growth? The stock market has gained about 10 percent a year, on average, over the long term. Of course, we can’t be sure what next year will bring, and we’re bound to see years of loss from time to time. Still, if you don’t need that money right away, investing in stocks gives long-term investors a great shot of beating inflation over time.

And while $100 may not seem like much today, every fortune has to start small. The sooner we start, the more time we have to build it.

PREVIOUS ARTICLE Set Your Kids Up To Be Better In 2019
NEXT What's the Difference Between a Bear and Bull Market?