What’s the Difference Between a Bear and Bull Market? 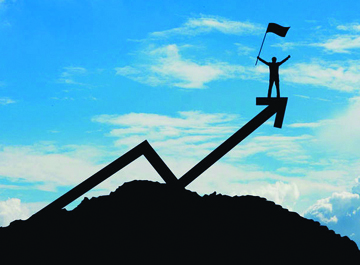 Bear and bull markets are the yin and yang of an investment cycle. In the simplest of terms: bear = bad, bull = good.

Generally, a bear market happens when major indexes like the S&P 500, which tracks the performance of 500 companies’ stocks, and the Dow Jones industrial average, which follows 30 of the largest stocks, drop by 20 percent or more from a peak and stay that low for at least two months. A bull market is more loosely defined as a period of consistently rising stock prices—like the one we’re in now.

Since 1926, we’ve survived at least eight bear markets, including one you probably remember: Between October 2007 and March 2009, the S&P 500 tumbled by more than 50 percent. The good news is that each bear has typically lasted a little over a year and stocks have always recovered, historically, and gone on to make significant gains.

What do bear and bull markets have in common? Both are inevitable. So you and your portfolio ought to be prepared to make the most of either. Aggressive growth investments, like small-company and emerging-markets stocks, might capture some big gains during rallies. More conservative holdings, like investment-grade bonds and Treasuries, should help preserve your wealth during downturns.

But remember: Another thing bear and bull markets have in common is that they’re unpredictable. That’s why you want a well-diversified portfolio, with a wide mix of stocks and government and corporate bonds, which can hold up through any type of market. Your mix of investments should depend on your own goals, risk tolerance and time horizon—rather than where you think markets are headed. That way you’ll be ready for whatever may come next.

PREVIOUS ARTICLE Will $100 Today Be Worth More or Less a Year From Now?
NEXT Here's Why It Pays to Invest for the Long Term