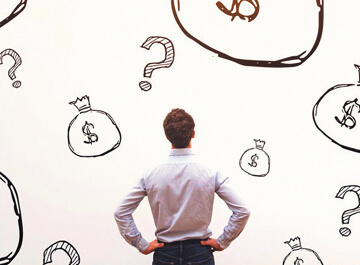 Seeing that much in my account was shocking. I’d worked for it, but I certainly wasn’t raised with money like that. I grew up firmly cemented in middle-class Texas with parents who worked average jobs with long hours—and instilled the same work ethic in me.

In elementary school, I remember saving my $3 weekly chore money rather than spending it. And I always found ways to earn a few extra bucks, like running lemonade and soda stands, as well as a baseball card trading business (though it only netted $29 in profit). But my first “real” job was digging ditches during those scorching Texas summers when I was 15.

Around that time, I learned that my grandfather, one of the cheapest guys I ever knew, was a millionaire. This was a guy who drove a 15-year-old beater, changed his own oil, drank the cheapest beer and was the sole provider for five kids. He never made more than a low five-figure, blue-collar salary, but he put his earnings in the stock market—and wound up with $1.2 million in investments by age 60.

This was my eureka moment. If Grandpa could do it, anyone could save their way to wealth.

I was inspired to kick my own savings into high gear. In 2006, at 16, I started a “retirement account,” where I contributed my life’s savings: $500 from odd jobs and working construction. I use quotes because it was just a savings account at first. But after much deliberation—and reminding myself of how my grandpa amassed his million—I asked my parents to open a brokerage account in my name, and I took the plunge. I continued contributing to this account through high school, just a few hundred dollars at a time.

Watching the market plummet during the 2007-2008 financial crisis didn’t help my nerves. Everywhere I looked, the talking heads on TV warned the end of the world was near. But I never stopped investing or withdrew a penny. In fact, I put aside as much as a few thousand a year—money I’d earned from summer construction jobs. Finally, the market rebounded—and my portfolio grew significantly. By 2013, my modest, periodic contributions had turned into $25,000. It was a powerful lesson to trust in buying low.

When I graduated college in 2013, I was offered an entry level job in finance, making around $50,000. Even though I was earning more money than ever before, I hardly changed a thing about my lifestyle, so I was able to invest about $15,000. I had been happy with almost no money in college—so, I thought, what difference would a few high-priced additions make to my life?

I still went out when invited, went on dates and bought dinners. I even took vacations. But I kept my old car—so I had no car payment—passed on the trendy downtown apartment in favor of a place 20 minutes away, saving over $500 per month in rent, and gave serious thought before parting with any of my hard-earned dollars. I also went without cable and signed up for the cheapest Internet package. My life wasn’t any worse than my friends who went down the opposite path, and I got the satisfaction of watching my account balances significantly increase. (If you’ve never experienced your own compound interest snowball rolling down a mountain, you’re missing out on one of the most prosperous and liberating feelings I know.)

Three years into my career, I’ve been fortunate to receive a couple promotions and am now making $70,000. I could have treated each raise like I’d won the lottery, upgrading my lifestyle and negating the increase entirely. Instead, I’ve stayed the course. I’ve pocketed the raises and bumped up my automatic contributions to my 401(k) and brokerage account—banking anywhere from $20,000 to $30,000 a year, plus my employer’s 401(k) match.

Today, I save around $35,000 each year—more than 60 percent of my after-tax salary—and my net worth has risen more in the past nine months than in the previous nine years, thanks to increased contributions and the powerful effects of compound interest. Barring a collapse of the free world, based on my average returns to date and my current rate of savings, I figure I can either work a standard career and retire with several million, or take an early exit from the rat race around age 40 with nearly $1 million—free to live life in whatever way I please.

And that’s exactly what my whole savings strategy is all about. As my returns multiply, so does my freedom.

*Sean’s details have been verified, but his name has been changed at his request to protect his privacy.