Here’s Why It Pays to Invest for the Long Term 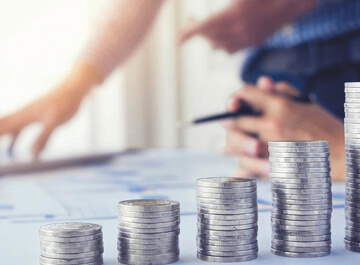 If you were fully invested in the stock market for all of 2017, good for you. The S&P 500, which is often used as an indicator of how the market’s doing, ended the year up about 19 percent. So, how long can this rally last?

While no one can predict what the market will do next, more than a century’s worth of history has taught us that 1) there will be a downturn at some point, and 2) that does not mean you should take your money out.

How do we know that?

Because the stock market has gone up significantly over time, but it doesn’t climb in straight lines. You don’t have to go back very far—just to May 2017—to find a day when the S&P dropped nearly 2 percent.

Deutsche Bank analyst David Bianco points out that dips of 5 percent are so common that they’ve happened every year but three since 1960. Full-blown “corrections” of 10 percent or more happen less frequently, though many analysts think we’re overdue.

How long do corrections last?

Usually not too long. Historically, the average correction lasts 71.6 trading days, or about three months.

Of course, you can find some periods when the S&P 500 suffered a big drop and didn’t recover for years. If you’d invested in an S&P 500 index fund on January 1, 2008, for example—in the midst of the global financial crisis and just before the onset of the Great Recession—you’d have to wait till 2012 to see a full recovery. That said, if you’d left your money alone, and reinvested any dividends, your balance would have grown by an estimated 137 percent by the end of 2017.

In other words, it really does pay to be a long-term investor.

Trying to time the market, or going in and out of the stock market frequently. For one, a lot of stock growth happens in spurts. Perfectly timing these swings is nearly impossible.

Consider this: While the S&P 500 increased 19 percent last year, if you got cold feet during the cold months and withdrew money just for the month of February, you would have missed about 20 percent of those gains: a full 3.72 percent. The rest of the year, most monthly gains were in the 1 to 2 percent range.

Another example? S&P 500 investors have enjoyed about 8 percent annual returns in recent decades, but we mostly owe those gains to a few really good days. According to an analysis by Charles Schwab, investors who missed the top 10 days of trading during a recent 20-year stretch would have seen their returns fall by almost half, to 4.5 percent. If they missed out on the top 20 days, the returns drop to just 2.1 percent.

What are the chances of actually trying to time that right?

Let’s just say the odds are very much stacked against you.

A safer bet? Stick it out—knowing that there’s surely a bad day, or even a few bad months, ahead of us. But you’ll only lose if you overreact and pull your money out.

PREVIOUS ARTICLE What's the Difference Between a Bear and Bull Market?
NEXT 6 Money Lessons I Learned From My 6-Year-Old Daughter