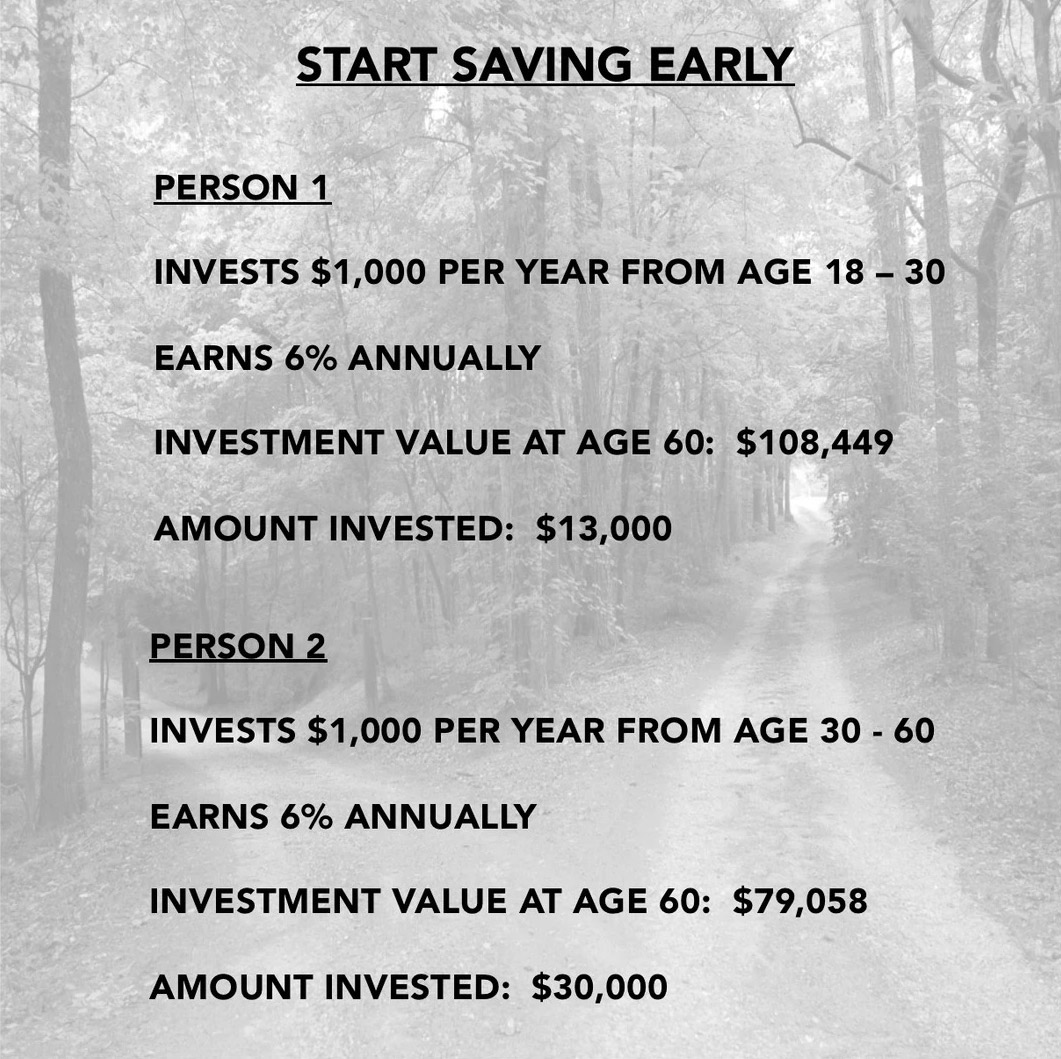 “Compound Interest is The Most Powerful Force in The Universe.”

This famous quote from Albert Einstein speaks to the significance of compound interest as a financial concept. Those are strong words from someone who most people consider a credible source on math-type stuff.

Once you understand what compound interest means, it can change your perspective on money and investing.

Even with all that fanfare for the topic, I’ve been guilty of neglecting to properly cover it when discussing financial literacy. I’ve found I take for granted that I was taught the power behind compound interest at a young age. I was fortunate that I had classes that taught me these lessons as early as middle school, but not everybody is so fortunate.

As I’m ready to wrap it all up and pat myself on the back, a woman asks a question “Can you explain compound interest? I’ve heard it before, but I really never understood it.”

Whoa there! I should have STARTED with compound interest! I had taken it for granted that this room full of grown-ups understood what it means when we say, “compound interest is the most powerful force in the universe”. Even if they had been taught before, they really appreciated being taught again.

It showed me that something this fundamentally important bears repeating. I’ve heard more than a few coaches stress the importance of “practicing the fundamentals” in sports. Growing up, I would hear “even Magic Johnson practices dribbling and passing every day”. The same thing applies here, even if you’ve heard it before, let’s take another look at THE POWER of Compound Interest.

What is Compound Interest?

Interest: Money paid or received as compensation for depositing or loaning money.

Compound Interest: Earning interest on both your initial investment, but also your previously earned interest, over time. If an investment is left alone and continues to “compound” – it will earn a little more each year.

This is best shown in an example.

Rate of Return: The money earned on an investment expressed as a percentage of the original investment.

Let’s use the example above and assume you earn 10% for 10 straight years. That’s a BIG rate of return, but it keeps the numbers round.

You earned $11 on $110, so you have $121 at the end of year 2. You earned “interest on interest, which means you are earning a little more each year. That is the “compounding” effect.

Think about it. At that point, you are earning more in interest each year than you initially invested. THAT is the POWER.

Now granted, 10% is a high rate of return, and not realistic to expect for most investors. The average annual return for the U.S. Stock Market as measured by the S&P 500 Index (a mix of 500 U.S. Companies) since 1927 has been about 10% according to Investopedia.com.

That being said, the market almost never returns anything near the average. Only 6 times in that span has the market returned between 5% and 10%. It usually returns much higher or much lower than 10%. Such is the nature of the stock market. These big swings can make it very difficult for investors to stay invested and actually earn the high return, but that is a conversation for another time.

This compounding effect can be very powerful over a long period of time. People that save early and keep adding to their savings can reap the rewards of compounding. A substantial amount of the wealth in this country was created by individuals on modest incomes saving every paycheck into a retirement plan at work (401k, 403b etc.), investing it, and leaving it alone for 20 or 30 years.

If you invest early, and keep adding to it, you can build quite a financial foundation for yourself.

This is despite the fact that Investor 2 saved or set aside quite a bit more than Investor 1.

Investor 1 was able to start early, and that allowed the POWER OF COMPOUNDING to do its magic.

In fact, the power is so strong, even if Investor 2 continues to add $1,000 per year FOREVER, she will never catch up to Investor 1. The 13-year head start was enough to make the compounding more powerful than the extra savings.

As Einstein alluded, this is quite powerful. It becomes even more powerful if our young people are armed with this knowledge. How might your behavior change as you move from your teenage years into your 20’s if you know this information?

Perhaps it prevents you from signing up for a high interest credit card.

Albert Einstein was also quoted with the following:

“Compound interest is the eighth wonder of the world. He who understands it, earns it…he who doesn’t… pays it.”

There are mathematical shortcut formulas to get you to the final amounts, noted below.

You can calculate the value after one year at a given rate, without having to add your initial investment to the interest with this formula:

You can calculate the value after several years at a given rate with this formula (N = number of years):

Originally published at https://www.teachingkidstobuystocks.com/ on October 18, 2019

If for any reason you are not satisfied with BusyKid in the first 30 days, we will refund your money back. No questions asked.

*BusyKid can not refund any stock purchases made. Only the subscription paid will be refunded. Guarantee applies to new subscriptions only.*